Has anyone used the new Italian cup, called Lybera in pharmacies in Italy and Ecocup in online stores? Any feedback?

Hi all. There is a great wealth of information here, which I could very easily spend days sifting through! I've started going through the FAQs to try and find the answers to my questions, but all I've managed to end up with are more questions!

I'm 34, no kids. I ordered the Diva Cup 1. At the time, I just saw that 1 was for women who hadn't had children, and 2 was for women who had. I guess I was a bit quick to pull the trigger. I got it yesterday, and my period had just started the day before, so I was anxious to try it out. I inserted it following the package directions, and it seemed like it was pretty simple and I couldn't feel it, which I took to be a good sign. But I was spotting like crazy. I did some reading here and gave it another shot. There was some blood in the cup, so it wasn't completely out of line. After reinserting it, I wore a pantyliner for awhile, and had absolutely no spotting, so I figured all was good.

I went to sleep and woke up about 6 hours later feeling like I was about to leak all over if I didn't get to the bathroom ASAP. As it was, I ended up looking slightly like a murder victim by the time I made it the short distance down the hall! The cup had about 1/2 ounce of blood in it, so definitely not full. There was probably about the same amount which had leaked out. I was half asleep and didn't feel like fumbling with the cup again, just to wake up with the same issue in a few hours, so I just put a tampon in.

My first thought was, "Should I have gotten the Diva Cup 2 instead?". The cup feels good when it's in. It feels snug. The stem doesn't stick out, but I can easily find it with a finger stuck in just a little way. I am seeing a lot of posts about how the cervix sits, and how the cup should line up. I thought I knew my body pretty well, but I'm really not sure how to figure out how my cervix is situated, and where the cup is in relation to it. I know what my cervix feels like, but I don't feel that I have all that much control as to where the cup ends up lining up. I really want to love the cup and get away from tampons for good, but I didn't think there would be such a learning curve! I'm going to give it another go again today. Maybe it was just my sleeping position that caused the leakage, but I somehow doubt it, as I've seen lots of mentions of cups leaking when they're not full, but I still haven't been able to piece together why that happens.

Do I just have the wrong cup?

I'm sorry I haven't had time to read all of the FAQs and sift through all of the archives before posting. I definitely will continue reading through everything when I have more time.

It hurts my leg and if i lay down it hurts too so i do not use it at night. I also have the divacup 2 am 33 and have had 2 kids.

It feels like pressure around the hole inside or something like it's touching something in there that it should not.

I live in ottawa,Ontario,Canada so i think it's only the divacup i can get?

I keep trying with it though i do not want to give up but sometimes the pain is too much.
Hi all,

I have been using my Mooncup for 2.5 years now, regularly boiling it in water for about 5 minutes before keeping it at the end of each flow. A few months ago, it started to have these rough spots at the base near the stem. Now the spots kinda spread to the whole cup (picture in spoiler as reference). It's only on the outside of the cup, the inside is perfectly smooth like how I first got it. I was searching around the Internet for explanations or solutions but unfortunately couldn't find any. Any ideas? Should I boil it longer or add something into the water to boil it?
[Pic attached] 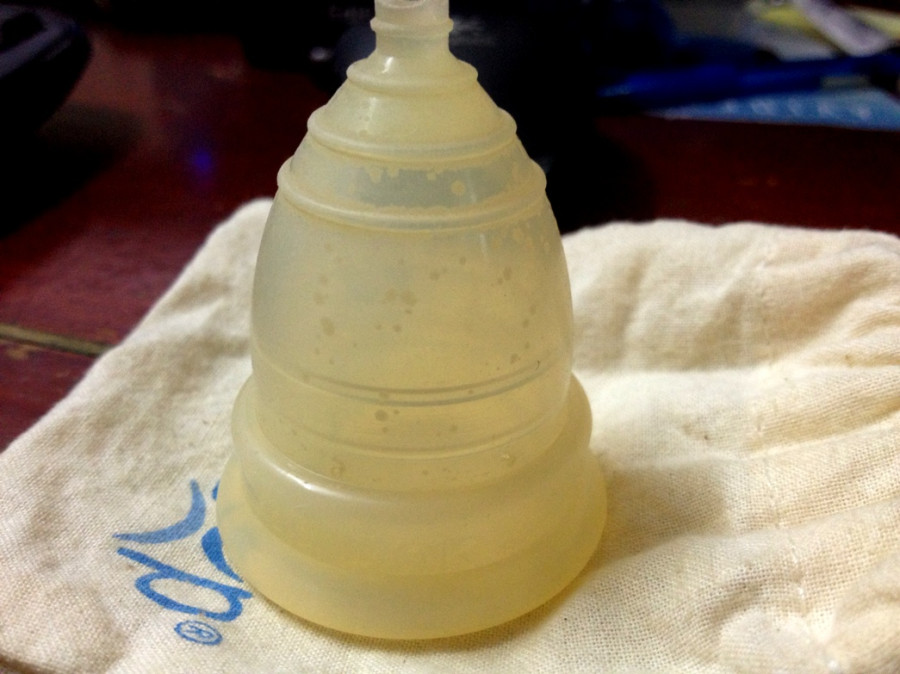 Ive heard some remarkable things about the Diva Cup (or, I should say, menstrual cups in general). After giving birth, I found that I could no longer use tampons as Australia does not sell the OB brand, and all other tampons available here on the Australian market expand in length (rather than in width - as does OB), and would slide out in a matter of minutes (an hour at most) - I have had to resort to pads ever since.

Ive been wanting to try out menstrual cups for MONTHS, and finally got around to ordering one online. As Diva Cup seems to be the most popular brand, I went with this one. I've never been so excited about getting my period!

The first evening was OK - it seemed to go in easily and relatively painlessly, overall very minimal spotting. Besides the stem of the cup constantly poking me, it didnt seem too bad at all. I left the cup in overnight, and was relieved that I wasnt able to feel the cup stem during the night while I was lying flat in my bed. When I woke up in the morning - there was not a spot of blood anywhere - yipeee!

During the morning however, as I was walking around and doing my regular duties etc, I pretty much felt the stem again with every single step that I took, and everytime I sat down. By lunch time I was terribly annoyed, so I followed the advice of many a diva-cup-user, and shortened the stem to probably about 2-3mm at most. I shouldnt have done this - not only could I STILL feel the stem, but it was a more extreme, sharper pain than beforehand!! The annoying dull pain had now turned into something much worse, and by the end of the day, I couldnt get the friggin thing out of me quick enough... You cant imagine what a relief it was to get it out - I was in so much pain!

Truth be told though, it actually came out kind of 'by accident' when I went to have a pee... I sat on the toilet as per normal, and although it hadnt been a problem beforehand, I suddenly felt the urge to 'push', as if giving birth... I had been put through so much pain today by the damn thing, I was actually quite happy to get rid of it, so I just sat there and kept pushing it out.

Overall, I am astounded at how well the cup worked in general... Besides the first couple of spots at the start, I had no leakage whatsoever. But the pain of the stem just became unbearable, and theres no way in hell I could put up with this for 5 or 6 days straight... Certainly not at work when I need to be concentrating on others things...

So, I suppose my first question to you is - has anyone else had the same difficulty? What did you do to get over it?

Im disappointed in myself for 'quitting' so early, as I know that some users take months of persistence to get used to wearing a cup... But I just cant put myself through cycles of pain like Ive had yesterday and today.

I am now exploring other options - Ive ordered the Instead Soft Cups, and will see next cycle if they work any better. They will be less painful, for sure, as they dont have that annoying protruding stem. Has anyone used these before? What is your verdict?

I have been researching menstrual cups a lot and have found many horror stories about the Diva Cup being too long or not fitting right. I know there are many options for menstrual cups, but the Diva Cup seems to be the most advertised and talked about. I have never used a menstrual cup and am fascinated by the concept. I would love to buy one, but am unsure of which one would work best for me.

I am 16 years old and a virgin. I am very petite (5 foot 0 inches). Although I am very active (running and softball), I have weak pelvic muscles. I tend to stay away from tampons when I can because I can feel most. I don't know the position of my cervix and am not sure how to find it. I have a fairly normal flow so capacity isn't a huge issue, but I do spend around nine hours at school each day so I am looking for a cup that can hold that amount.

Do you have any recommendations or suggestions?
Collapse