So I bought a Sckoon, hoping that it would give me some capacity over my mini meluna small without being too big. My original cup, the moon cup uk (small) does fit inside me (just) but is rather uncomfortable.

So here are some comparison pictures. I knew I would need to cut the stem off and maybe remove the grip rings off my sckoon but I was hesitant to do so since I want to lend it to my friend to try out and she would need the stem. Conveniently, it is the exact same shape inside out as right side out (also pictured). The air holes became inverted in angle and looked a little funny but they worked okay. It was much smoother this way too (and a little more slippery). 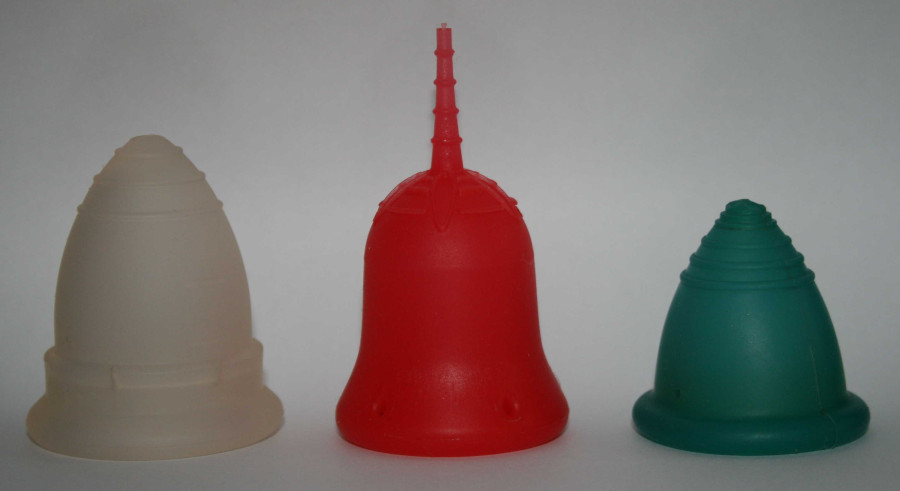 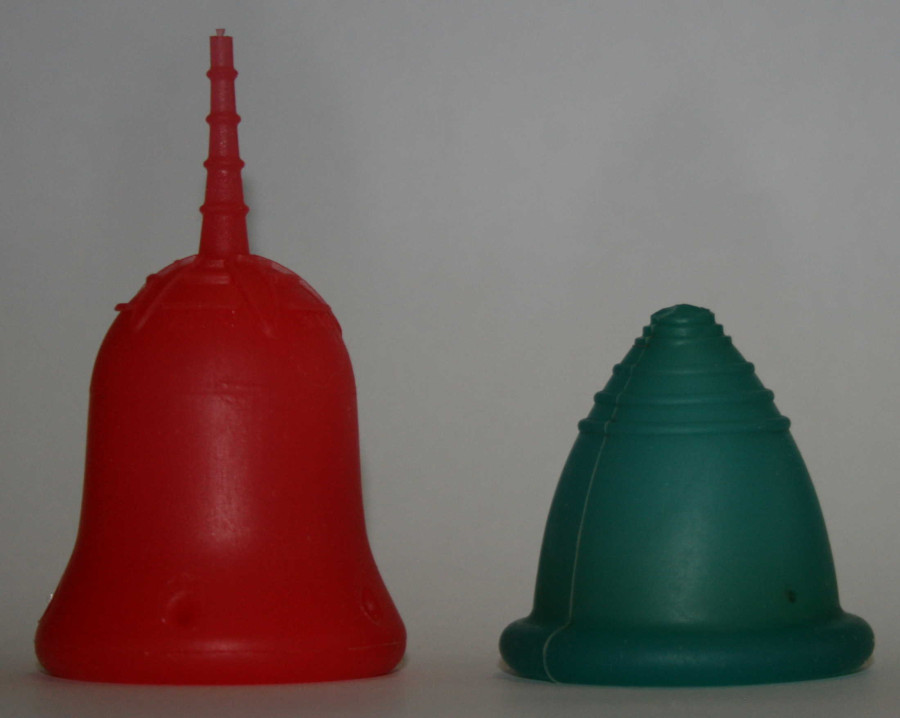 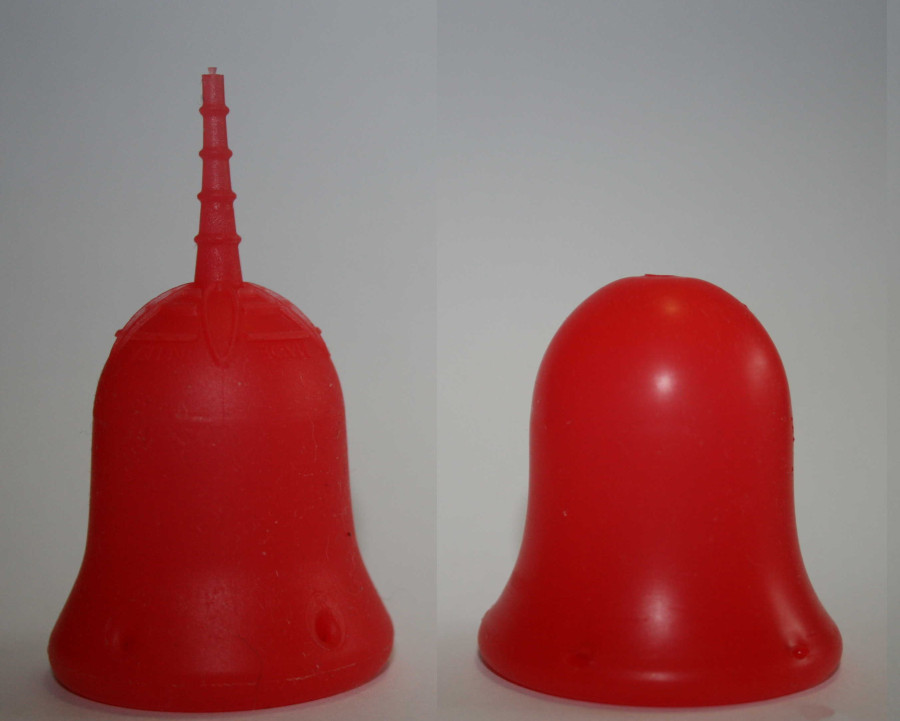 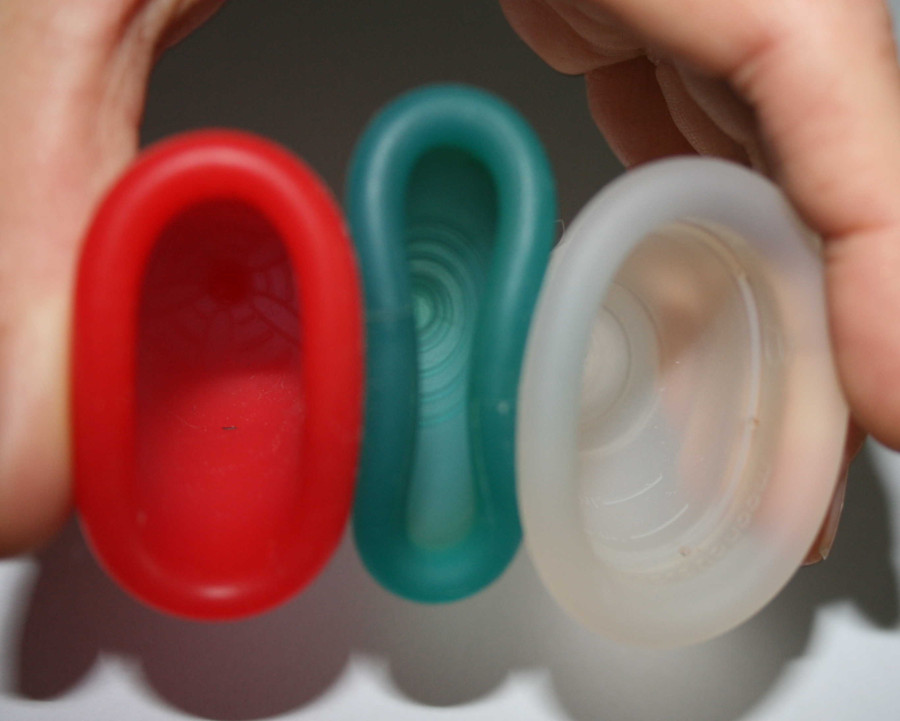 Interesting manufacturing features to note about the Sckoon (since I am a mechanical engineer in training, this stuff fascinates me): The injection point on the mold is on the inside at the bottom and is reasonably well finished. It seems to be a four part mold with two pieces for the bottom where all the grip craziness happens, coming apart either side (though I don't think they disassemble this part of the mold to remove the cup, it was just put together this way). Then there is a middle section up to the mold line halfway up the rim which would include all the hole stuff since they mold that into the cup (not sure how exactly but I would be interested to find out). Then there is the top piece which molds the top of the rim and the whole inside of the cup and contains the injection point. The middle and top pieces are the ones that come apart after molding to release the cup.

The Sckoon wasn't as soft as my mini meluna soft and was actually more comparable to the moon cup uk in hand but it was much much more comfortable around the rim once inside.

I found the holes kind of hard to clean. Their size is fine and you can still do that thing with your hand over the cup and giving it a squeeze to push water through the holes but because there is a lot of surface area inside the holes they just trapped blood that much better. But don't let it put you off the sckoon, just be aware.

So here's the bad news. While being intermediate in size between the moon cup and the meluna, something about the bell shape at the bottom meant that it really didn't work out. It wasn't painful exactly but had a sensation of threatening burst past my pelvic floor and I couldn't wait to get it out at the end of the day. It was right at the entrance of my vagina and I could pretty much touch it without touching anything else and there wasn't any room for it to go up further. It made sitting (especially on my bike) feel oddly uncomfortable. I didn't notice this on the first day of my period because I was distracted by cramps (and I think my cervix was higher anyway) but it's just not for me. So in summary, not too long exactly but too long, wrong shape. I'm thinking of trying the small meluna next. I don't think I needed the sckoon level of capacity anyway. But man do I wish I had more room (or that there were a greater variety of short cups available)!

So i just recently ordered MeLuna sizes XL and L. I am having soo much trouble putting them in. I've tried every single fold I heard and right now I'm in pain. I think I basically scraped inside of me. Half of it was still peeking out. I gave up and ended up using a tampon. I think the sizes are too big so what can I do about it? Can I exchange them? I got these sizes because i have a heavy flow and i wanted that capacity. I have never used them until today.

Just to say on Easycup(.fr), someone mentioned the Amulette several months ago. Oh this cup looks to be the same as the Si-Bell and Natu, but was renamed so for the Lithuanian market.^ Si-Bell did sell their moulding process here again.
www.amulette.lt/11

And, indeed, when one goes to the natulovesyou.com site, we have the choice through 3 flags, between the English version, Italian, or.. Lithuanian one! ;)
This one also leads to a ladynatu website, that is off. Has it been available before the Amulette site settled ?^

And, indeed, when one goes on the natulovesyou.com website
Collapse